Although the fashion industry in the Middle East might sometimes appear to lack an international voice, a group of young creatives in the region is aiming to redress the imbalance.

Driven by issues ranging from religion and occupation to colonialism and identity, by channelling their experiences and viewpoints into their clothes, these designers are determining what it means to be a creative in this region. Whether they are focusing on promoting greater transparency in the fashion industry, experimenting with new materials and techniques, or calling for more inclusivity, they are pushing boundaries across the board.

Their collections are shaped by a desire for change. Edgy, unusual and packed with heart, this is fashion as a tool for good. And it goes beyond lip service. As Shukri Lawrence, founder of Palestine’s Trashy Clothing, points out: “Politics is fashionable right now … and I hate that.” For these brands, social issues are a part of their core DNA and woven into the fabric of every piece they make.

With the aim of showing the world what it is to live and create in the Middle East, local brands are taking the battle to fashion’s gatekeepers, challenging traditional ways of doing things and demanding to be heard. Here are five brands reclaiming the Middle Eastern narrative.

Palestinian designer Meera Adnan is a woman on a mission. Born in Saudi Arabia, she moved to Gaza in 2004 and launched her eponymous label earlier this year. Her collections are at once free-form and flowing, oversize and tailored – but at the root of her ideas are politics, religion and a focus on the power of fashion.

“I want the narrative of the multilayered identity of Palestinian youth to be told by them and translated through the garment,” she says. “Especially in Gaza, where the youth are bravely challenging political restrictions on a daily basis.

“Eventually, we aim to create a platform for creativity that would allow a future Palestine to explore the ramifications of separation and geography on identity. Both collectively and individually.”

While the heavy notes of oppression, separation, religion and occupation play out in modest silhouettes, often marrying a tailored style with a streetwear aesthetic, it’s the daily battle of life as a designer that imprints most on Adnan’s work.

“Coming from a place where your existence is a daily battle doesn’t really leave much space for the luxury of creative expression,” Adnan says. “Uncertainty and fear are permanent emotions when you live in a place like this. Restrictions on movement, electricity cuts, clean water scarcity and military escalations are just some examples of daily challenges.

“However, I also come from a land where the arts have been celebrated for hundreds of years. A place of rich culture, diversity and intellectualism. To me, I’m simply representing the reality of the place that Palestine has always been.”

One and Four Studio

For Egypt-born Engy Mahdy, a life in design seemed somewhat preordained. From sketching at the age of 13 to a formal fashion education in Auckland, New Zealand, the rest followed naturally. A first collection in Dubai came in 2016 and she launched her own label, One and Four Studio, only a year later.

Featuring a style rooted in streetwear – inspired by the rich diversity of the Middle East – Mahdy’s true calling is for greater transparency in an industry she thinks has lost its way. The reach for wider change began at the doors of her own label. “I started off by focusing on the ethics of it all. I wanted to know the workers personally and make sure there was transparency from their workplace about their wages. But I quickly realised this industry is very demanding and very consumable. That’s why I decided to focus on sustainability as well.”

Although it’s certainly becoming more common in 2020, the road to a sustainable workplace isn’t always easy in the fashion industry. Whether that’s because of the higher prices needed to raise standards or a simple lack of avenues to explore in the first place, this is a space in which you require the courage of your convictions – often to the detriment of your balance sheet. For Mahdy, the aim is to simply keep improving.

“To date we have worked with deadstock fabrics, organic cotton and non-chemical dyes and prints, and recycled packaging,” she says. “We also took our collection online with a pre-order model.

“For me, it’s always a work in progress. With every line or project I aim to find better or different ways to do this, becoming more ethical and sustainable in the process.”

One label aiming to tackle fashion’s power dynamics head-on is the Palestinian four-piece known as Trashy Clothing. Coming to life in 2017, thanks to an Instagram project featuring T-shirts with familiar western slogans and Arabic writing, the mission statement for Trashy has always been empowerment. This is fashion that comes with unflinching acceptance – something the brand’s founders believe the industry sorely lacks.

Recent fame has come the label’s way thanks to its creativity in the face of Covid-19. As closed borders prevented them from displaying their latest collection on the runway in Iceland, Trashy decided to embrace its online roots and develop the world’s first Cyber Fashion Week.

When companies rebrand to a cultural or political movement and use it as a tool of creation, it feels fake and performative

Featuring six days of style, digital runways and after-show parties, CFW included brands from around the world. It was also an indicator of the creativity bubbling under the surface in the Middle East. But like many of the young designers coming out of Palestine, it’s an edge that arrives courtesy of circumstance. This fashion is a product of its environment and it can’t, and certainly shouldn’t, be faked.

“Politics is fashionable right now,” says Trashy founder Shukri Lawrence. “If you’re not political, apparently, you’re not on trend, and I hate that.

“This element should come from the heart. When companies rebrand to a cultural or political movement and use it as a tool of creation, it feels fake and performative. It makes me sad. This needs to be the brand’s message from the start.”

Born out of a desire to enact change in Palestine, the collective was a reaction to how women are treated in Mjalli’s homeland, as well as the lack of will to change the patriarchal system.

Unsurprisingly, the BabyFist remit is far from conventional. Along with a streetwear-styled collection, you can also expect campaigns for menstrual education in schools and partnerships with the Palestinian Medical Relief Society to manufacture face masks in Gaza. This is fashion, but the message and awareness-raising are all-important.

“The role fashion plays in politics is that of a kaleidoscope,” Mjalli says. “The power of art is that it presents injustice through a different lens, through a turning of the kaleidoscope. Fashion is inherently intimate, as it rests on our skin. It is a hyper-personal mode of expression. So, when fashion is presented within its political framework, it can often be far more powerful.”

Currently, Mjalli and BabyFist are working alongside GQ Middle East fashion editor, Keanoush Zargham on a mentorship programme for creatives in Palestine.

“When we launched the call for creatives, the response was overwhelmingly positive,” says Mjalli. “It was a highly unique programme that shed light on an often overlooked aspect of Palestine: fashion. I posed the question: ‘Do you share Palestinian art as much as you share Palestinian suffering?’ and this programme was a refreshing response to that.”

Created by Jordanian designer Christina Tadros last year, Elvaux is a fashion brand that offers a neat line in social commentary. The root of creation lies in Tadros’s desire to unlink the shackles of the Levant’s colonial past and allow the region to heal and grow through discourse.

With a collection designed to spark dialogue, Tadros gets to the heart of the issue with a ubiquitous fashion item. “Elvaux gives me the platform to express my own narrative and ideals regarding the Levant,” she says.

“Through a simple T-shirt, the consumer is able to spark a discourse to heal and reconcile colonial attitudes in the Arab world, and to dismantle the western dogma towards the Arabs.”

While the road to change is long, young creatives are working to make their voices heard through art. It’s a narrative that doesn’t get played enough internationally, but that’s exactly the point.

“I love seeing designers in the Arab world try to reclaim their narrative and present themselves in a way they want to be presented,” Tadros says. “Despite the social, political, and economic unrest in our region, designers and artists always aim to put forward their own reality. Unfortunately, it’s one that hasn’t been favoured by the media for decades.”

Wed Sep 30 , 2020
Kane Brown’s video shoot for his recent collaboration with Nelly on “Cool Again” didn’t come off without a hitch. In an interview, Brown reveals that his makeup artist on the shoot had to be hospitalized after a bizarre accident. The video for “Cool Again” features Brown and Nelly performing the […] 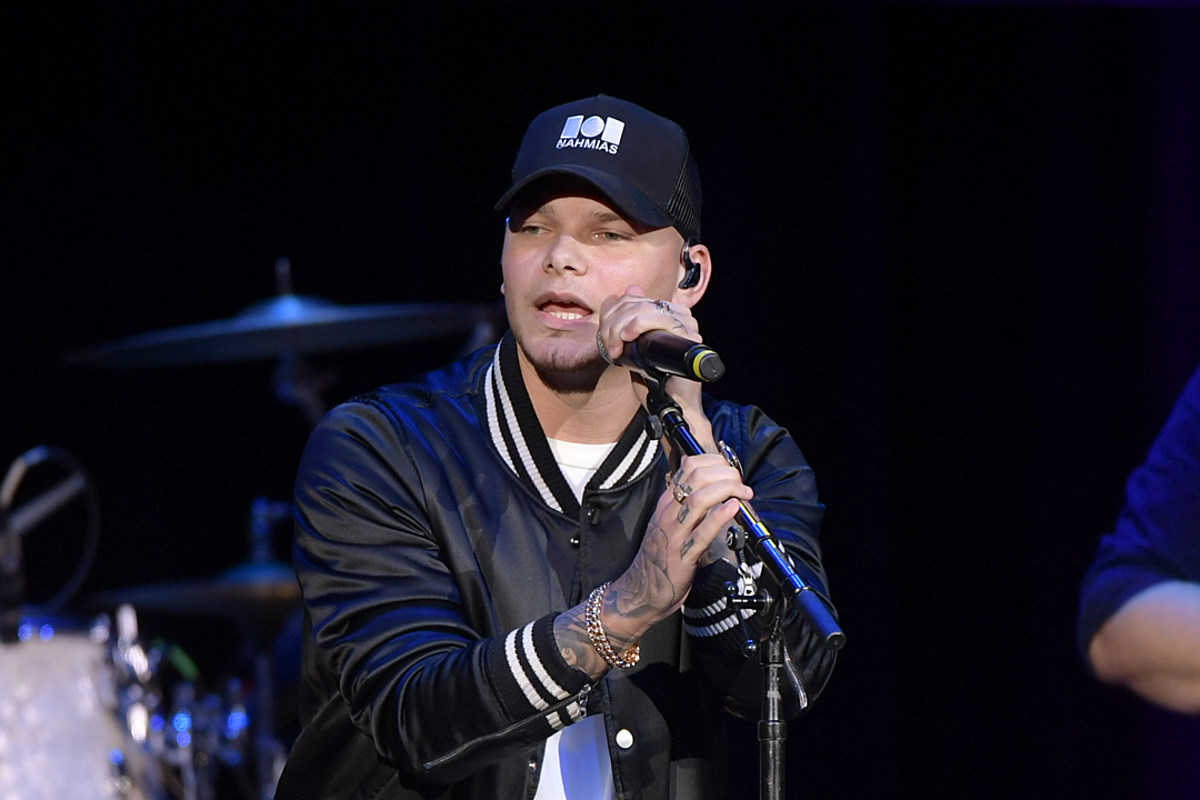