The transition from T-shirts to sweaters, the last humid days of summer to the first chill in the air always remind me of back to school books and supplies. This year feels  quite different as each family and parts of the country approach education differently, with school opening extensions and parents deciding whether their kids are going to class or going virtual or a bit of both.

As an adult jewelry enthusiast who loves to hunker down with a good book, I am always up for cozying up on the couch in a cashmere sweater and uncovering more information on my  favorite subject. This fall, there are a bunch of jewelry books that will be out in September, October and November that provide a wealth of knowledge on gems, historical jewels, the evolution of a jewelry house and more. Read on to find out what books you might want to keep you company this season.

GEMS(Flammiron, September 2020)will appeal to the geological nerd, the historical jewelry buff, and the celebrity follower. The subject matter and flow of the book all come together under the supervision of gemology expert Francois Farges. What’s most compelling about this book is that beautifully photographed minerals are superbly matched by  the legendary jewels created in the same stones. For example—seeing the emeralds in the rough form and then how they were expertly crafted into museum quality jewelry is a treat for those of us who appreciate every part of the process and love to learn about minerals we have never heard of –or those we have but don’t know enough about. Boasting 304 pages and 270 color illustrations, this book is compact yet packs a huge punch.

What began as an exhibition catalog for the prestigious collections of the Muséum national d’histoire naturelle in Paris and the legendary French jewelry house of Van Cleef & Arpels for the exhibitions Gems, running from September 16, 2020-May 4, 2021 is educational, well written and a great gift idea to turn it into a stand-alone jewelry reference  book on all subjects mentioned.

When you read the title Jewels That Made History: 100 Stones, Myths, and Legends by Stellene Volandes (Rizzoli New York, October 2020) you surmise you are going to gain knowledge on jewelry from ancient times through modern day. You might also assume you’ve read at least some of  these stories before and you might be correct but there are 100 tales of jewels and gems and as I was pleasantly surprised at the scope of the tales Volandes has weaved together in this treasure chest of a book. Volandes author of Jeweler and Editor-in-Chief of Town & Country since 2016 is an enchanting storyteller and jewelry expert and her imprint of wit, lively writing style, charm and deep knowledge runs through all of the 100 vignettes. She has included everything from infamous jewelry heists to royal weddings to how jewelry figures into the renowned houses, the lives of famed celebrities and ancient precious treasures.

At once entertaining and educational, each of the vignettes is engaging and delves deeply into a variety of subjects that range from the people who wore and own the jewels to those who discovered the gems to different jewelry moments in history. It’s more than a jewelry book, those I can put down and pick up again in the morning. But Jewels That Made History kept me reading  ‘just one more story’ until I realized I had stayed up all night. It is illustrated with archival images and beautiful large splashy photos of the jewelry, which with the text, positions each of the stories in its rightful place in jewelry’s sparkling past and present.

“1887 Was it Jewelry Vandalism?- The French Crown Jewels are sold, a moment called historical vandalism by some, but an opportunity for others, including an entirely new class of American millionaires, to own some of the most famous jewels in history. THE EMPRESS EUGENIE BROOCH. Designed as an old mine and old European-cut diamond openwork sculpted bow, suspending two rose, old mine and old European-cut diamond tassels and five articulated graduated old mine-cut diamond cascades set en pampille, mounted in silver-topped gold, circa 1855,By François Kramer .”

If you love jewels with a royal lineage—breathtaking tiaras and a noble family that spans across Yugoslavia, Italy, Greece, Belgium and Russia, then you are sure to get lost in jewelry designer Prince Dimitri’s history which he describes in Once Upon a Diamond: A Family Tradition of Royal Jewels  which he penned with Lavinia Branca Snyder and with a Foreword by Carolina Herrera and Introduction by François Curiel (Rizzoli, September 2020)

He reveals his ancestry through stories, photographs of his regal family and full page photos of the awe-inspiring jewels designed for and collected by the princes, and princess, dukes and duchesses who comprise Prince Dimitri’s regal descendants. Seeing how the awe-inspiring tiaras and other jewels were worn in painting and photographs with the accompanying text creates a feeling of getting to know his rich history and family members, from his paternal grandparents

There are also never-seen-before images in photogras and family albums of Grand Duchess Elena of Russia (later Princess of Greece and Prince Dimitri’s great-grandmother) present remarkable never-before-seen images of pre-revolutionary life of the Russian imperial family, and their court.

Prince Dimitri, who founded his jewelry company in 2007, after holding the position of senior vice president of jewelry at Sotheby’s Auction House and later as head of jewelry at Phillips de Pury & Luxembourg has also included exclusive and unpublished designs of 150 illustrations and photographs of  his own  contemporary pieces, inspired by his family’s jewels.

Perhaps my favorite part of the book with its awe inspiring jewels and intriguing lineage is the reproduced inventory notebook of the jewels belonging to Grand Duchess Elena Vladimirovna. Each jewel is recorded in elegant penmanship accompanied by an amazingly detailed watercolor illustration. Not only do the jewels come to life in the illustrations but they are the type of jewels that are not only stunning but wearable in a contemporary context. (unfortunately I do not have a photo I can share of that. You will have to buy the book (-:

Queen of the Belgians Tiara: “The diadem known as the Queen of the Belgians Tiara was made of diamonds and platinum and commissioned from Cartier in their “garland style,” in 1910. The year 1911 was a great one for Cartier and the history of the tiara. They held an exhibition in April in London that showcased nineteen tiaras. This tiara was altered in 1912 by Cartier to be worn as a bandeau. In the 1920s, shorter hairstyles created a perfect new way to highlight the more casual role afforded the fairer sex, while offering an opportunity to wear the tiara in a more modern way—as is seen here in a portrait of Queen Elisabeth of Belgium, the mother of Queen Marie-José of Italy, dated to the 1920s. She continued to wear the Cartier Tiara into her widowhood, including to the wedding ball of her grandson, King Baudouin.”

As we dream of when we can travel again, this holiday brings us a book that takes us on a magical and unprecedented tour through the Eternal City. Bvlgari’s deep roots in Rome  has provided inspiration  Bvlgari Roma: Travel Tales For Beauty Lovers Edited by Jan Králiĉek (Rizzoli New York, November 2020) which brings together some of the best-known Roman authors of fiction and essays who connect the city’s most iconic landmarks with the classic Bvlgari designs they have influenced. This book guides  the reader through the Eternal City and Bvlgari’s cultural heritage, stopping at the majestic landmarks and monuments and the classic jewels that are inextricably linked to the city. As editor and artistic director Jan Králiĉek describes  in the Preface, “You will understand how and why the curves of a building are mirrored in a necklace, and how the detail of a mythical painting unfolds into the story of an iconic bracelet or how the dyadic character of a building can be reflected in something as intimate and subtle as a ring.”  The book is further enhanced by contributions from figures connected to the city by birth, by adoption, or by mere passionate attachment including renowned names from fashion, cinema, sport, and music like Anna Della Russo, Lily Cole, Ennio Morricone, Roberto Rossellini, Boy George, and Francesco Vezzoli.

A passage from the book to describe the photo: Today, practically all that is left are the bricks, but at one time this was a feast of precious marbles, exceptional statues—Hercules and the Farnese Bull, now at the Archaeological Museum in Naples—sumptuous décor—the tubs that Pope Paul III turned into fountains in Piazza Farnese— and, above all, multicolored mosaics. It was precisely in the mosaics of the Baths of Caracalla that Bvlgari discovered a precious sign, a shape that opens up fan-like and imitates the leaves of the ginkgo biloba, a mark from nature that has been turned into a geometric line. A gentle shape that rests on a woman’s skin and transforms her look, illuminating her, dress- ing her, rendering her discreetly elegant and refined. Fulfilling the dream of every woman, to feel like a diva even in her everyday life. With just one certainty: real beauty is born from the care and attention one takes both inside and outside oneself.

Sat Sep 26 , 2020
A jewelry designer created earrings to keep AirPods in place while under stay at home orders. Suhani Parekh of Misho Designs was inspired by her own AirPod mishaps. The earrings come in three designs, and retail for between $60 and $125. Visit Business Insider’s homepage for more stories. Suhani Parekh […] 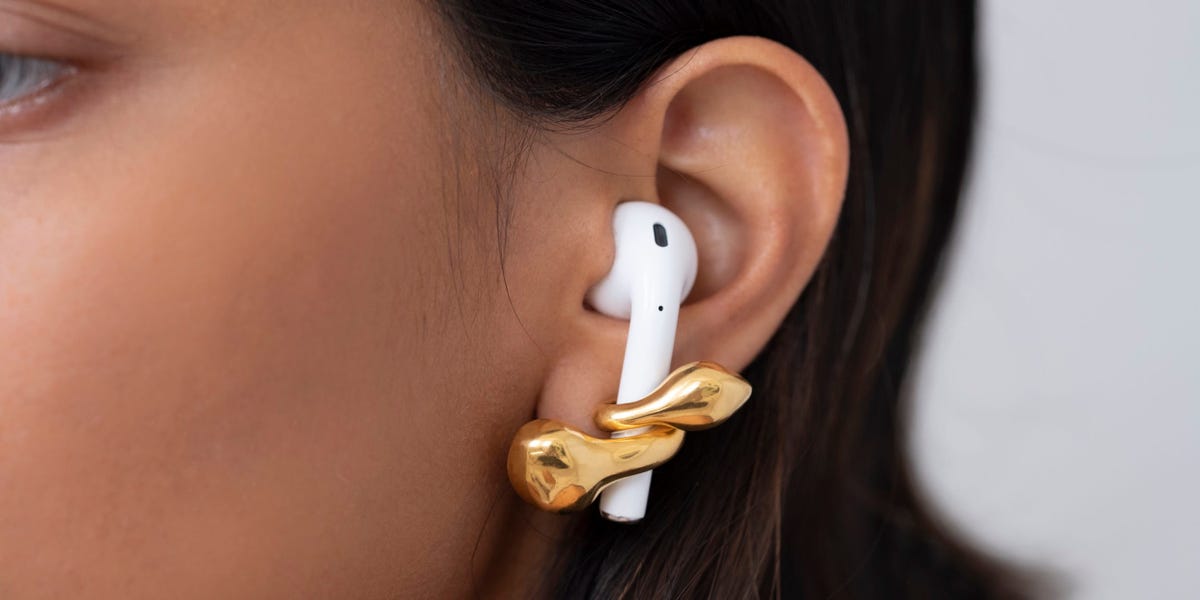