When Cambodia’s Prime Minister Hun Sen complained in February about online sellers posing in “sexy” clothing to stimulate demand for their wares, Ven Rachna – whose low-cut blouses and lingerie photos had made her a successful Facebook entrepreneur – was summoned to her local police station.

She was told that her clothing choices had been deemed harmful to Cambodian traditions and was ordered to refrain from sharing any further photos or videos of herself wearing such revealing outfits.

A video posted to Facebook by the police shows her apologising for her actions, yet according to officers this did not deter Rachna, who was arrested soon afterwards in response to a new Facebook post. Within days, she had been charged with offences related to pornography by a court in Phnom Penh and was jailed for six months, though she served only two of these before being released.

Get the latest insights and analysis from our Global Impact newsletter on the big stories originating in China.

Cambodia’s government is in the process of pushing through a new public order law that would police people’s manner of dress and other forms of expression in the name of preserving Khmer culture and “national traditions”, which has sparked broader concerns that more women will be punished for wearing revealing clothes, in violation of so-called traditions and norms.

The Interior Ministry finalised a draft of the law on June 16, with it since being sent out for consultation at the provincial level before being voted on by parliament. On social media, there was an immediate backlash against the proposed ban on men going shirtless, and on women wearing dresses that are “too short” or “too see-through”.

© Provided by South China Morning Post
Women wearing dresses in a park in front of the Royal Palace in Phnom Penh on August 11. Photo: EPA


Ouk Kim Lek, secretary of state at the ministry, last month told The Phnom Penh Post that most provincial authorities – who would be tasked with enforcing the legislation – had voiced their support for it. However, he said clarification had also been sought, with some places such as coastal areas asking if they would be exempt from the new law.

Although much criticism has been levelled at the legislation’s targeting of women over the way they dress, a copy of the draft law reviewed by This Week in Asia shows that its scope would extend far beyond clothing – with provisions that would allow the authorities to discipline people for making noise or speaking too loudly, and a ban on the sale of alcohol between midnight and 6am without special permission.

Other aspects of the new law could be used against informal workers and the homeless, with proposed bans on “arbitrary and disorderly” sales of goods in public; the setting up of temporary shelters; attracting customers “in a way that affects orderliness and public order”; and all forms of begging.

It further stipulates that those with a “mental disorder” must always be accompanied by a guardian, while another provision bans the “use of face masks or other disguise” in public or private – in direct contravention of the Health Ministry’s Covid-19 recommendations to wear masks in schools, on public transport and in cinemas.

© Provided by South China Morning Post
A fisherman maintains his boat in Phnom Penh. Under the new law, men would be banned from going shirtless. Photo: DPA


Multiple provisions have been flagged by no fewer than 65 civil society organisations as possible violations of international human rights law, given the bill’s broad wording and its potential to be used against vulnerable groups.

Chak Sopheap, director of the Cambodian Center for Human Rights, said that though men’s dress was mentioned, the authorities were far more likely to use the law against women, given previous arrests of those like Rachna, as well as the police’s tendency to blame victims in gender-based violence cases.

“These embedded patriarchal values used to police women for their clothing choices are the same values that permeate more widely into society, creating institutions and officials that do not value the rights of women,” Sopheap said.

Provisions that broadly banned “clothes that affect the national tradition and dignity in public places”, with some narrow exceptions for arts, tourism and other sectors, could also be used against the LGBT community, she said.

Though homosexuality was legal in Cambodia and the LGBT community enjoyed “a level of relative visibility” in society, Sopheap said discrimination was still present, even among government officials.

“This draft law contains an extensive array of provisions that effectively criminalise the everyday activities of many within Cambodia,” she said. “Not only is it extremely problematic for women’s rights, it would affect the enjoyment of human rights for many people across the country, including economically disadvantaged members of society, those who work in the informal economy, individuals with mental illnesses and people simply exercising their fundamental freedoms of expression, peaceful assembly and association.”

More than 21,000 people have signed a Change.org petition protesting against the draft law’s ban on “revealing” clothing, and not long after it was finalised by the Interior Ministry, the government launched a crackdown on small groups of dissidents – detaining about a dozen activists who took part in small protests of 50 or fewer people against the law in the capital.

The law itself could be used as another tool to silence dissent, civil society members said, with one article allowing the authorities to stop events and another broadly banning “actions … that affect national tradition and dignity in public places”.

When copies of the draft law began making the rounds on social media, blogger and university student Seth Neary – who has about 20,000 followers on Facebook – said she felt compelled to write about it on her blog “Switching”, which aimed to unpack stereotypes in Cambodian society, so that more people would take seriously a piece of legislation she saw as yet another example of the authorities using the excuse of preserving culture to unfairly target women.

“What, by doing that (wearing revealing clothes), we can destroy culture?” she said. “No, culture happens by the habits of people and we have a whole lot of culture that we need to conserve. They (the authorities) think about things that would ‘destroy’ Cambodian culture but they never think about conserving other (parts).”

Even the designs of celebrated Siem Reap-based fashion designer Muoy Chorm could come under closer scrutiny should the law be passed, featuring as they do male models with bared chests under sunny orange suit jackets, fishing nets draped over women’s torsos and short-cut dresses of thick, dyed rope – one of his signature designs. But Chorm said he did not believe that photographs of his designs would violate the proposed law because modelling takes place in a context outside daily life and activities, and he felt the authorities would respect that.

“This has nothing to do with the people that wear what they like and their own style,” he said. “Yes, as I know pretty clearly that the judgmental (people) will never think why people (are) wearing swimming suits at the pool and the beach. There is nothing (in the law) affecting the design (industry) because when people own (clothes), they know where it would be worn.”

While Chorm might be right, Cambodia’s Culture Ministry certainly has a history of targeting performers over their clothing – notably banning actress Denny Kwan in 2017 from performing for one year because of her provocative attire. Other actresses and singers, meanwhile, have been issued warnings.

Former Khmer-language actress Sok Srey Mouch received a warning from the ministry in 2018 over the way she dressed after posting a number of photos of herself wearing low-cut tops on social media. The 40-year-old, who now lives in Singapore with her husband, still uses her acting skills occasionally by giving theatrical performances at private events – and said she had no plans to stop posting photos of herself in bikinis and dresses with low necklines.

Born foreign: in Cambodia, it’s not easy being Vietnamese

“I don’t understand in what way I am ruining Cambodian culture. I also don’t want to explain myself to anyone with that kind of mindset,” she said in Khmer. “When I die, I can’t take my body with me. So I think it’s important to do what makes me happy. As long as my husband and family are supportive of me, that’s all that matters.”

She said she “sincerely hopes” that lawmakers would be “open-minded enough” to look at neighbouring countries and make the parts of the law relating to revealing clothing apply only to specific places such as sacred sites.

“It should not apply to everywhere,” she said. “After all, which girl does not like to dress up and look beautiful?” ■

This article originally appeared on the South China Morning Post (www.scmp.com), the leading news media reporting on China and Asia.

Mon Sep 28 , 2020
NEW YORK CITY — Stay-at-home orders may have rocked the booming beauty industry, but Blushington wasn’t letting a global pandemic get in the way of making their customers feel beautiful. Blushington’s CEO, Natasha Cornstein, and her team closed all six of their locations ahead of the shutdown for the safety […] 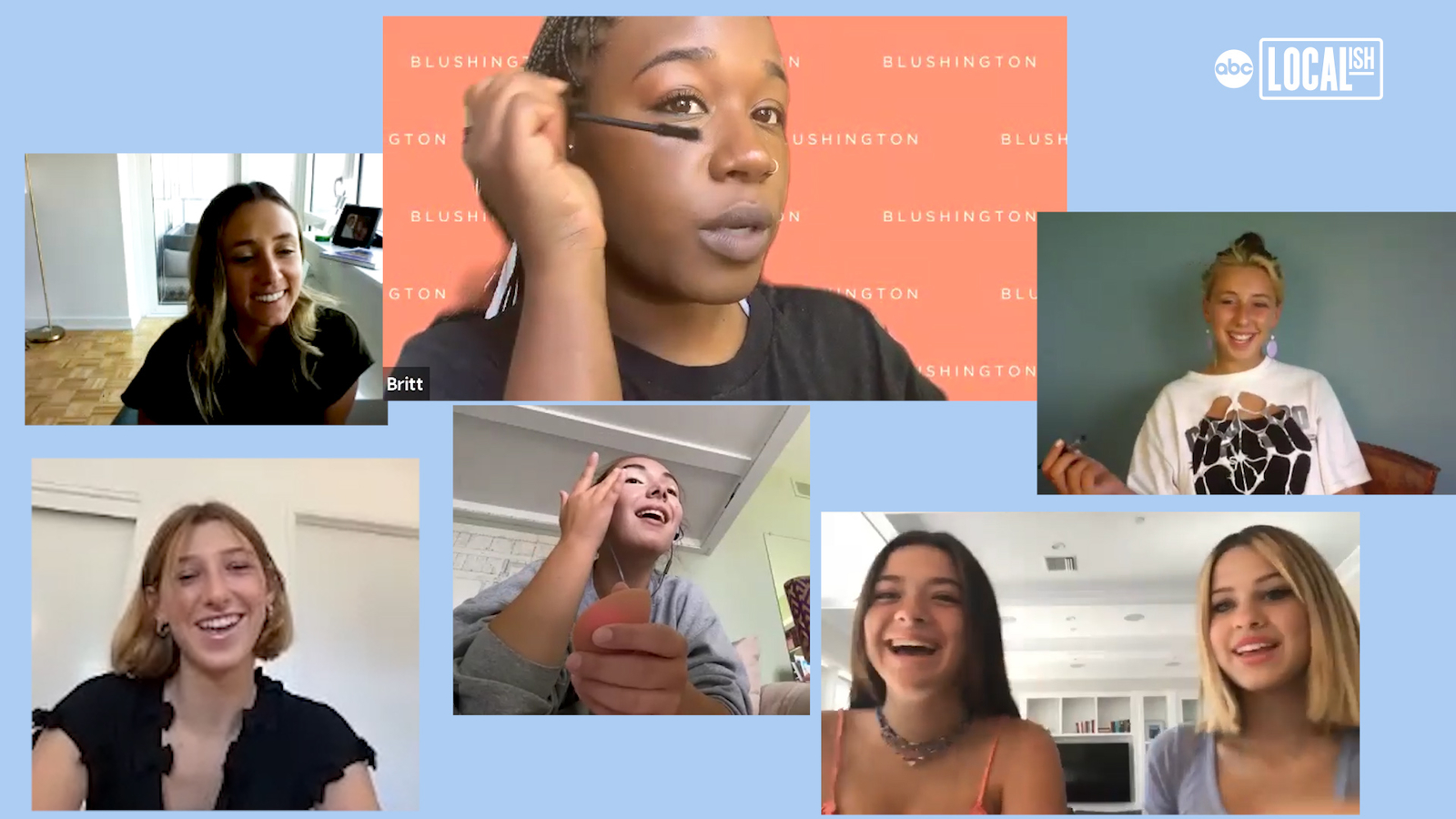