Billy Porter is a man who knows how to rise to a fashion occasion. For the 2019 Met Gala, the “Pose” star dressed as the Pharaoh god Ra and was carried onto the red carpet by six shirtless men, while his 2020 Grammys ensemble included a hat with a crystal-curtain fringe that opened and closed.


Then at this year’s Academy Awards, he donned a 500-strong diamond necklace from British jeweler Lark & Berry, while he performed a medley with Janelle Monae. The diamonds, as flawless as any other worn at that event, weren’t dug out of the ground, they were grown in a laboratory.

Porter isn’t the only celebrity wearing lab-grown diamonds. The Duchess of Sussex has been photographed donning a pair of earrings from London-based Belgian brand Kimai, Lady Gaga wore earrings from London designer Anabela Chan to the “A Star is Born” UK premiere in 2018, and Chan’s jewels were also chosen by Zoë Kravitz when she attended the 2019 Met Gala.

Buying a diamond that has none of the negative human or environmental impact often associated with mining is appealing to anyone concerned with the provenance of luxury items. However, as with many sectors, including fashion, where ideas about what is and isn’t ethical influences consumers’ spending, the situation isn’t always clear-cut.

Lab-grown stones aren’t new. They’ve been around since the 1940s, though the big breakthrough is generally dated to December 16, 1954, when General Electric (GE) produced the first commercially successful synthetic diamond — for the manufacturing and tech industries. These stones had all the hardness and high levels of conductivity of mined diamonds but, because they weren’t made to be seen, flawlessness and color weren’t priorities.

It was only during the 1970s that diamond labs became interested in trying to produce stones that looked more like natural ones. Finally, by the 1980s lab procedures became refined enough for the output to rival mined stones when it came to the famous four cs for pricing and choosing a diamond: cut, clarity, color and carat.

Diamonds made in a laboratory aren’t fake, they are chemically and structurally real, unlike cubic zirconia or mossanite, which look similar to diamonds but have different chemical and physical properties (and which you can easily spot if you breathe on one of these gems — it’ll fog up).

The only difference with lab-grown stones is that the intense heat and pressure required to form them doesn’t happen naturally, but is instead simulated via two chemical processes. Both start with a flat slither of another diamond, known as the seed, then the first option is high pressure high temperature (HPHT) and the other is chemical vapour deposition (CVD).

The former places the seed in among pure graphite carbon and then exposes it to extreme heat — around 1,500ºC — and extreme pressure of approximately 15 million pounds per square inch. The other option involves placing the seed in a chamber filled with gas enriched with carbon and heating it, which forces the carbon atoms in the gas to stick to the seed; the build-up of which grows the diamond. After this, you get your stone.

The superior quality of this new breed of lab-grown diamonds means that fine jewelers now have a choice. It is a choice that, despite there being no visible difference in the two types of stones, has led people to take very firm stances on which type of diamond they prefer — and the reasons are often positioned as ethical ones.

Nearly seven years ago award-winning jeweler Anabela Chan visited a mine in Sri Lanka on her honeymoon.

“It was a life-changing experience for me. I was shocked and saddened to see the working conditions of the mine, the risks and the inequality involved in the excavation of such precious things,” she said via email. “I did not see joy nor romance, and as a young designer, that experience was heartbreaking.”

After that Chan was determined to find alternative materials to make her fine jewelery inspired by the natural world, and her research led her to synthesized and simulated gemstones.

Chan is one of a handful of designers creating fine jewelery but eschewing mined stones because of their possible ethical implications. Another is the Porter-approved Lark & Berry, which is based in London and is a celebrity red-carpet favourite, and Duchess of Sussex favorite Kimai, set up by the daughters of two diamond-trading families from Antwerp.

“We couldn’t find any transparency or any simple answer about the origin of (the diamonds we were looking to use),” explained Kimai co-founder Sidney Neuhaus via email. “Looking deeper into it and talking to many diamond traders we heard about identical diamonds made in a lab and saw it as our opportunity to bring transparency and ethics to an old-minded industry.”

Many people still associate diamond mining with the horrific environmental and labor practices surrounding conflict or “blood” diamonds. From 1989 to 2003, a series of civil wars in west and central Africa were fueled by funding from the illegal trading of diamonds. The mines where these stones were extracted were unregulated and used vulnerable workers — sometimes, children, to manually dig the stones from the ground. It was this that led to the enactment of the Kimberley Process, a multilateral trade certification scheme established in 2003 to stop conflict diamonds from entering the mass marketplace. This marked the start of the diamond industry’s attempts for rehabilitation, which continue today.

In 2019 De Beers, the world’s largest diamond miner, launched its version of an end-to-end traceability platform, which is intended to be adopted across the industry. Already taken up by the likes of jewelery store network Signet as well as the world’s second largest mining company Russian-based Alrosa, Tracr is a scheme that enables diamonds to be identified and traced along the supply chain from mine to retail.

Tiffany & Co has also announced its new tracing initiative, which will allow customers to find out the exact country where each individually registered stone is cut, polished, and set.

“We began vertically integrating our supply chain over 20 years ago to be able to offer this degree of transparency today,” said Tiffany & Co senior vice president of diamond and jewelery supply, Andrew Hart, via email.

Alongside questions of the ethical treatment of workers and communities, the mining industry has also been called to task for its carbon footprint, which has led to a group of nine De Beers sightholders — an authorized purchaser of rough diamonds — to pledge in July this year to work together to shrink their carbon footprint.

At the same time, some companies within the diamond industry have called out the lab-grown world for its apparent environmental failings.

In a report published in 2019 by the Diamond Producers Association (DPA), which renamed itself the Natural Diamond Council (NDC) in June this year, it was claimed that because the labs where these cultured stones were produced are in countries that relied on coal or natural gases for energy, the emissions were three times higher to produce a polished lab-grown stone, compared with a mined one. Using what the report termed “an average of estimates in the public domain,” it surmised that for every polished carat 160kg of CO2 was produced and that this figure for lab-grown stones was closer to 511kg per carat.

But California-based lab-grown diamond company Diamond Foundry — which counts Leonardo DiCaprio among its investors — is 100% hydro-powered and disagrees with this.

“One of the biggest issues with the report is that it is hard, and inaccurate, to try to pile all lab-grown companies together and make blanket statements about their environmental impact,” says Martin Roscheisen, CEO of Diamond Foundry via email.

“Diamond Foundry currently uses 100% hydropower in our production process and is the world’s first and only certified carbon neutral diamond producer in the world. This information does not fall into the storyline the DPA wants to tell, so in their report they focused on lab grown companies that still use a lot of energy and are not focused on minimizing carbon footprint.”

Dr Saleem Ali, professor of energy and the environment at the University of Delaware, agrees with this perspective. “The DPA report did not consider the full life cycle of diamond mining — exploration operation and closure. Also, the DPA did not consider that synthetic diamond manufacturing can be relocated to more clean-energy areas, which is not possible with mined diamonds. Their numbers for synthetics were based on a snapshot of where the labs are now.

But David Kellie, CEO of the Natural Diamond Council, which has just launched a campaign fronted by Bladerunner 2049 actor Ana de Armas to promote the ethically responsible side of diamond mining, believes that focusing on this one statistic is missing the point of the report.

“I don’t know of any other industry that has attempted to evaluate its sustainability and environmental impact the way the diamond industry has and also managed achieve a consistency of these metrics across our members,” he said via Zoom.

“Also, what we’re doing isn’t an exact science so you can’t accurately compare any two points of data, such as perceived environmental impact.”

Allison Rippin Armstrong is an environmental scientist who has worked in Botswana and in the Northwest Territories in Canada, where she acted as a compliance specialist when De Beers proposed mining the area. “I think it is important to remember that both types of stone are a result of an industrial process and both have a footprint,” she said over the phone.

This is an opinion with which Dr Ali agrees. “My main point has been that both sectors have their space and opportunity in the market. Mined diamonds provide more jobs along the supply chain, while synthetics have less environmental impact. It should not be a zero-sum game. Synthetic rubies and emeralds have coexisted in market with mined ones for decades and the same is possible with diamonds.”

This article has been updated to correctly state the location of jewelry brand Kimaï’s headquarters and the nationality of its founders.

Fri Oct 2 , 2020
YouCam Makeup and YouCam Perfect’s 2020 Halloween makeup and photo features are the most striking yet, with a collection of interactive virtual reality costume experiences that are scary good. Perfect Corp., the developers behind the world’s leading virtual beauty app, YouCam Makeup, and photo editing app YouCam Perfect, debut their […] 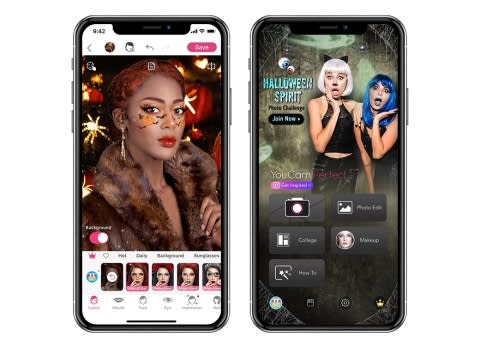