I love talking to strangers. When I was five, while a plumber fixed our refrigerator, I sat beside him and asked a million questions about his job. I interviewed shoppers in the grocery aisle too—wondering out loud about their lives, where they were going, and what they were doing. My family worried I’d get lost or abducted, and yet still, fast forward two decades, I’m more or less the same.

Before the pandemic I’d strike up random conversations with people all the time: on the subway, at the wine shop, in the waiting room at the doctor’s office. It’s always felt like second nature to me, so can’t say I ever really gave these friendly interactions much thought—much less did I consider them an important part of my days. But now, eight months into quarantine, I’ve begun to realize just how vital these small acts of humanity are.

More than ever, when my connection with friends and family has mostly been relegated to an iPhone screen, these casual, in-person encounters are the one thing that’s helping me hold on to a semblance of normalcy. But also, being able to give a quick smile—which is usually how most of these chance conversations start—is now impossible with New York’s necessary mask mandate.

If you’re an introvert, this whole thing might sound insane to you. But there is some research to suggest that smiling and our health—both mental and physical—are intertwined. For example, one study found that smiling helps lower our heart rates in tense situations, while another found that smiles and laughter can be linked to lower blood pressure.

I genuinely feel better—happier—when I’m able to let the people I come in contact with know that I think their dog is cute or I like their earrings. It’s not that I’m obsessed with making new friends, but rather that I merely enjoy engaging with my five-block radius in Brooklyn. Five minutes of conversation with a stranger sends me home feeling that I accomplished something meaningful. There’s a special feeling I get when I click with someone new. It makes me feel productive, energetic, and alive—even if all I did was pick up a bunch of cilantro.

Now, with our mouths hidden behind masks, people have been turning to other mediums to signal their good nature to others. One of the most heartwarming instances are the hospital workers wearing smiling photos of themselves on top of their PPE to lift the spirits of their patients. Makeup has become my version of that. While it’s always been a conversation starter for me, during the past few months makeup has become my lifeline—a way to connect, disarm, and invite intimacy.

From March until just recently, my only in-person interactions were ones with my live-in partner and whatever I could get during short stints outside. I didn’t wear a lot of makeup during quarantine, but occasionally, if I was feeling down, I’d wear something crazy colorful on my eyes to make me feel better. When I did, it always beckoned a good chat.

The first time I wore a funky eye out in quarantine was on a trip to the farmers market. I woke up feeling anxious that day, so I figured I’d try to jolt myself out of it by painting flowers on my eyes and throwing on a tie-dye tee with James Morrison’s face on it. I visited the vegetable stand and the clerk asked, “You like color, don’t you?” I responded wittily: “Haha, I’m rainbow.”

We launched into a conversation about the difference between cilantro and culantro, cilantro’s more pungent cousin. It was a heart-warming conversation that lasted all of three minutes. As I left I tried extra hard to smile big so he could see the smile lines on the corners of my eyes and thanked him for the fun new party fact.

The flaws in US-style democracy are surfacing

Mon Oct 12 , 2020
Reports suggest that the West Wing in the White House is almost deserted because so many aides and staff have contracted the virus Image Credit: Gulf News The United States is experiencing what is arguably its most chaotic year in living history. The administration has to contend with a pandemic […] 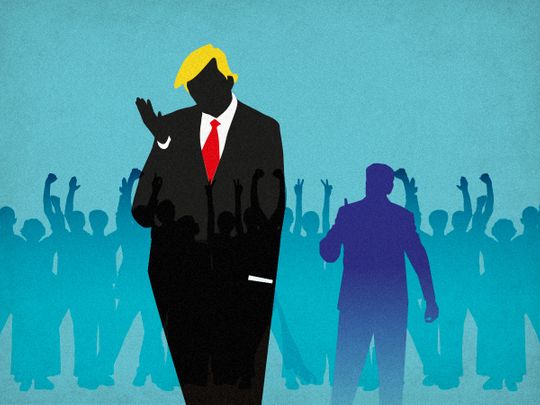