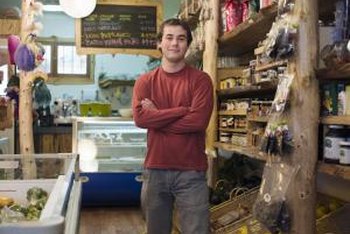 Ethics in business are the standards of conduct used to guide the moral choices made by business people every day. Some individuals hold themselves to higher ethical standards than others. From the standpoint of a coworker, customer or vendor, ethical issues in the business setting come down to being certain you can believe what the other person is saying and being confident he will do what he says he’ll do. Honesty and fairness are two qualities of ethical business owners.

Employees who believe they are being treated fairly by an organization that cares about them work harder and are more committed to helping the company reach its goals. One owner of a small business, for example, could choose to pay employees below-market wages knowing that they are not likely find better employment opportunities in a poor job market. Another company owner with a longer-term perspective could make the moral choice to pay above-market wages even though he doesn’t have to. His view would be that it is unethical to take advantage of the bad job market. The payoff for his choice is greater productivity, which translates into lower production costs and higher profits. He also is more likely to retain his best employees when the economic environment becomes more positive and job opportunities increase.

Small business owners can be tempted to make choices that involve questionable ethics when dealing with customers. One example is not fully disclosing the facts relating to a purchase, such as selling a reconditioned appliance as new. The customer is often at a disadvantage because he doesn’t know the right questions to ask. The penalty for operating a business in this fashion is low customer satisfaction and the likelihood the customer will neither purchase from that business again nor recommend it to others. This outcome has a negative affect on both revenues and profits because acquiring a new customer involves additional marketing cost, whereas selling to an existing customer does not.

Businesses that gain a reputation for maintaining the highest ethical standards can achieve the status of being the gold standard in their industry. They may earn awards such as being named in “Best Places to Work” surveys. This recognition allows them to attract the most talented employees, which in turn helps the company build its competitive edge. The most ethical businesses find it easier to attract customers as well. Consumers’ perception of how they will be treated by the business affects their willingness to purchase from it. In dealing with ethical businesses, they don’t have to be concerned about being sold inferior merchandise or being charged for unnecessary repairs.

Companies with low ethical standards over time may acquire an unsavory reputation in the marketplace and, in extreme cases, attract negative publicity. Consumers frequently contact the media and voice complaints. Television stations have consumer hotlines and do stories about companies that are the worst offenders. In this Internet age, word gets around quickly. Consumers who have had bad experiences with a company quickly express their grievances through email and through posting on discussion boards or consumer satisfaction websites. If the complaints are frequent and valid, the effect on sales and profits can be significant. Consumers may not want to purchase from the company even if its prices are lower than the competition.

Growing a small business depends on finding new ways to attract customers, and an effective way to do that is to develop joint ventures, marketing alliances or partnerships with other businesses. A business owner might find a company that has a large customer base in a city where his company is not well known. The willingness of these two companies to form a partnership is dependent upon both parties believing their potential partner is good to do business with. Every business relationship requires trust between the parties involved, because you can’t always be there to monitor what your partner is doing.

Dr. Will Kirby Claps Back at Fans For Making Fun of His Makeup

Sun Oct 4 , 2020
One of the most recognizable winners of Big Brother, Dr. Will Kirby, chose not to play in another All-Stars season due to his work and family life. However, he moved in next door to the houseguests as part of a week-long “neighbor” twist. When the legendary player made his return after Da’Vonne Rogers’ […]