In the wonderful world of Byredo Makeup, lipsticks rise up like futuristic skyscrapers and undulating, oyster-shell compacts pop open to reveal rows of glimmering eyeshadow. Considering the cult fragrance brand’s famously minimalist aesthetic, it seems like a departure at first glance. But as you pick up the products and play with their infinitely adaptable shades and textures, you realize it’s actually exactly what you would expect from the combined creativity of founder, Ben Gorham, and visionary makeup artist, Isamaya Ffrench.

“The human and emotive element is at the heart of what we create at Byredo,” says Gorham. “It was less about the practical, technical part of makeup. It was very much about creating a series of products that made people feel things. And that was the starting point.”

Together, Gorham and Ffrench brought this starting point to life through impromptu meetings, some that took place driving through Paris and London. “I think [Ffrench] brought me into her process in an interesting way, where everything started with a dialogue and most of it about how it made us feel,” says Gorham.

Ffrench’s saturated, otherworldly creations are memorable precisely because her ideas of beauty have never been constrained by others. “On a personal level, my ideas of beauty constantly change with age,” she says. “I’m a problem solver, and that’s part of what makes my job so constantly challenging and exciting. It’s my role to try and understand the patterns and movements of the ever-evolving beauty zeitgeist, and produce work that supports its demands.”

To speak with Ffrench about the state of makeup right now is to dive into insightful conversations about technology and body dysmorphia, but at the end of the day, both she and Gorham share a primary goal of encouraging people to play with the products as they wish, rather than instruct them on how anything should be worn. “After a decade of trying to conform to a standard set by commercial cosmetic financiers, the message now seems to be: ‘Don’t conform to anyone else’s ideals of beauty,” says Ffrench. “I feel that is the best message we’ve been given by commercial brands so far.”

If there’s one message Byredo Makeup channels, it’s to rediscover the human element of makeup. The full collection, which launches today (October 1), features 15 lipsticks, an absurdly chic lip balm, mascara, eyeliner, three palettes and 16 multipurpose color sticks (to be used freely on lips, cheeks and eyelids). Having spent the past month secretly testing everything, I can personally confirm that it lives up to Gorham and Ffrench’s lofty goals. My personal favorites are the $30 Colour Sticks, which come in a rainbow of buttery hues and finishes I can’t resist applying with abandon. Honestly, though, you’ll want it all. (And according to the brand, there’s much more to come and to covet.) Below, Gorham takes Forbes inside Byredo’s vibrant new venture.

Sarah Wu: This project was born out of the realization that there could be a visual manifestation of beauty for Byredo. What are some of the references you drew on for how this line would look?

Ben Gorham: “The shape and the design really reflect the function and use of each of the products. I interpreted Isamaya’s universe into these physical objects. I referenced ancient relics, things that I found to be extremely modern and objects that could have been designed yesterday or 3,000 years ago. There was something in my and Isamaya’s nostalgic approach—what I like to call ‘future memory theory’—to creating objects that truly felt unique and beautiful. We were both clear that we needed to design the packaging from scratch and that this wouldn’t go into standard product lines. We also felt this idea of curated color needed to come into the packaging, individually designed to create a collection of curated objects in their own right.

“The same applies to the campaign and visual representation. The makeup was created for self-expression and we didn’t want to dictate the way it should be worn, so the imagery needed to reflect this. Isamaya introduced me to the work of Jesse Kanda and the CGI image he created for Byredo Makeup was a really interesting way of reflecting the narrative.”

SW: I noticed the product names also draw from a wide range of references. What did you want to express when dealing with that element of Byredo Makeup?

BG: “First of all, we love the idea of having a little fun with the names. For example, one of the eye compacts has ‘Corporate Colors’ like ‘Eraser,’ ‘Manila,’ ‘Letterhead,’ ‘Pushpin’ and ‘Stylo.’ It’s a nod to the everyday makeup reference. It’s just about creating little stories, I suppose. It’s the same for the historic references of colors like ‘Mesolithic’ and ‘Lascaux,’ those earthy tones from ancient stones and found imagery. It’s about creating color stories that remind us of something, or give us something to connect with on an emotional level.”

SW: What sparked your decision to collaborate with Isamaya Ffrench?

BG: “It was about three years ago when I came across the work of Isamaya Ffrench, which I was extremely drawn to…primarily because of the creative vision, but also this notion that she was—in a sense—an outsider in her industry. I related to that a lot because it was how I perceived our journey initially in the fragrance world. I think that outsider perspective was something I felt we shared.”

SW: How was the process of working together?

BG: “We eventually met through a common friend and began a dialogue and had random meetings, sometimes in the back of cars between shows in Paris and in London. It created this discussion—I had an idea that color could be an important pillar at Byredo. And two and a half years ago, we decided work together to collaborate on this project.”

SW: This initial launch focuses heavily on color cosmetics, which you mentioned as your primary inspiration. Is there a reason you chose to emphasize these categories over base products like foundation?

BG: “I think it’s, again, back to the tools for self-expression. Once you get into foundations and skin care, you’re looking at very technical solutions for people. And I don’t think we’re at that point yet. I think we’re at the point of inspiring and encouraging people to play with the makeup. Will we get there? Yeah, we might. But for now, we’re here. And within this color arena, we still have a lot of stories to tell and things to explore.”

SW: Has working on this project over the past two years influenced or changed the way you approach fragrance creation?

BG: “Our instinctive approach has always been to be open and subjective, not only in this collection but also with Byredo as a brand. It’s a collection of products and smells and objects that lets people express themselves, and hopefully evokes enough emotion so that they can make it their own. I think that was one of the challenges posed: How do we create a color system that people can utilize creatively, but also in a very personal way to express their feelings? This project has heightened that connection even more for me, and I know it will further feed into the creation of the fragrances.”

Fri Oct 2 , 2020
Fashion labels are designing outfits for video calls during the coronavirus pandemic. A “waist-up” focus has been noticed at both Milan and London Fashion Weeks, with detailed necklines and relaxed trousers. Prada placed its logo near the collars of its tops, and featured large coats pulled around shoulders like a […] 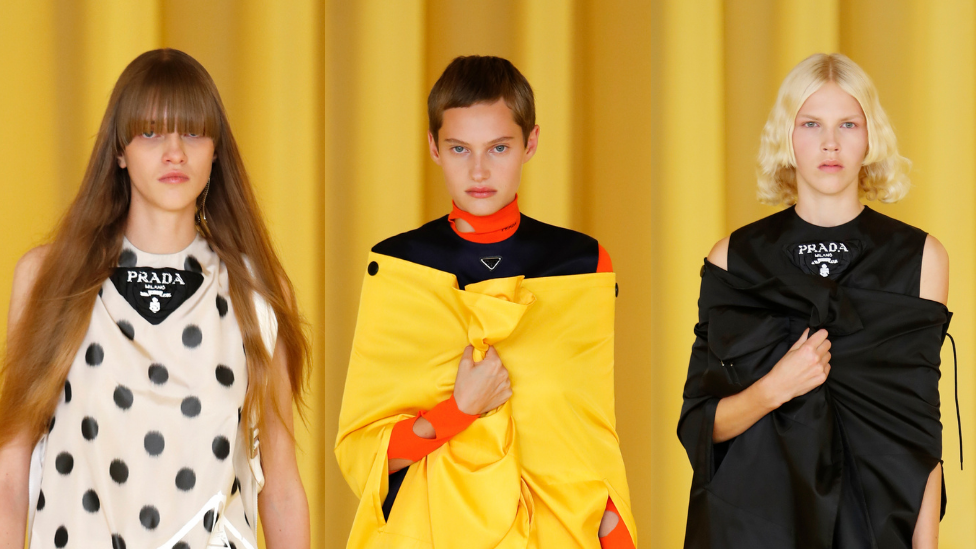