SAN FRANCISCO (AP) — The modest cash grant Iguehi James received from the Oakland African American Chamber of Commerce helped the clothing designer defray costs, including surge prices on elastic and fabric that jumped dramatically due to the pandemic.

The application process was simple and she qualified for a $5,000 “resiliency” grant, despite being a solo practitioner with no employees or storefront.

Along with the fiscal help, the grant reminded the 38-year-old novice entrepreneur that she is part of a community with a tradition of mobilizing to help members in times of distress.

“We’ve been denied opportunities, we’ve had to work really hard to get to where we are,” said James, who lives in Oakland, California. “When you have other people who know the struggle, know the plight, know how hard it is to be valued … to be seen, you just feel like you have a community.”

The chamber announced this summer that it had raised $1 million for its fund to help Black-owned businesses. It’s one of several launched in the U.S. since the pandemic began closing businesses and schools, and it’s a nod to the difficulty that Black businesses have in landing bank loans and the disproportionate impact the virus has on African American families.

Perhaps the most astonishing grass-roots effort has been in Portland, Oregon, where organizers have raised more than $1.7 million for Black residents of the city that has been in the national spotlight for its nightly protests against police brutality. The Black Resilience Fund has helped nearly 3,000 residents with groceries, utility bills, student loans and rent, according to its GoFundMe page.

Cathy Adams, an event planner and president and CEO of the Oakland African American Chamber of Commerce, said discussions about its fund began in late April as small businesses struggled to get help from the federal government’s paycheck protection program. Phone calls from hurting business owners broke Adams’ heart.

Meanwhile, the police killing of George Floyd in Minneapolis in May further underscored the inequities faced by African Americans in work, wealth and health.

“This resiliency fund? This is nothing but love,” Adams said.

Aaron Bryant, a curator with the National Museum of African American History and Culture in Washington, D.C., says the funds are reminiscent of the benevolent societies that began appearing in New Orleans and Philadelphia in the late 1700s to aid Black people in times of illness, death and other hardships.

“What we see happening now is really important because it shows the humanity, that we still have humanity in spite of all the obstacles that we’re confronting,” he said.

Shawn Ginwright, an education professor in the Africana Studies Department at San Francisco State University, says the funds highlight the discriminatory policies that have shut out Black people from acquiring capital and wealth.

In Oakland, Adams approached television stations to generate news coverage about the fund and spent hours on the phone pitching it until her voice grew hoarse. She worried the chamber might not meet its goal, but eventually Adams landed donations from more than 200 companies and individuals, including $200,000 from Clorox and $100,000 each from Blue Shield of California, Kaiser Permanente and online security company Okta.

“Several people called me crazy, but I don’t think what they said was personal,” she said. “I just think they did not believe in miracles.”

The chamber expects to award grants to some 150 businesses ranging from $2,500 to $10,000. Only chamber members can apply and recipients must complete a financial management seminar. Grants have been used for marketing, equipment and even a new restaurant location.

James, the designer, beefed up online marketing for her “Love Iguehi” line of colorful masks, head wraps, kaftans and clutches. The business had depended heavily on in-person pop-up events and conferences that have been canceled due to the virus.

The Red Door, a catering company, used its $10,000 grant to help retain seven of its roughly 20 full-time employees and has pivoted to mail-order snacks, pop-up meal events and meal deliveries.

“It’s really about hope, about extending hope,” said founder Reign Free of the grant program. “Once you lose hope, that’s it, you’re done for. They should have named it the Hope project.”

Sat Oct 3 , 2020
October is here and that means the scariest season of the year is upon us. One way to get festive this year is by using the power of makeup to transform into anyone you choose. Beetlejuice anyone?! Colorado-based makeup artist Baylee Madison knew exactly how to put her skills to […] 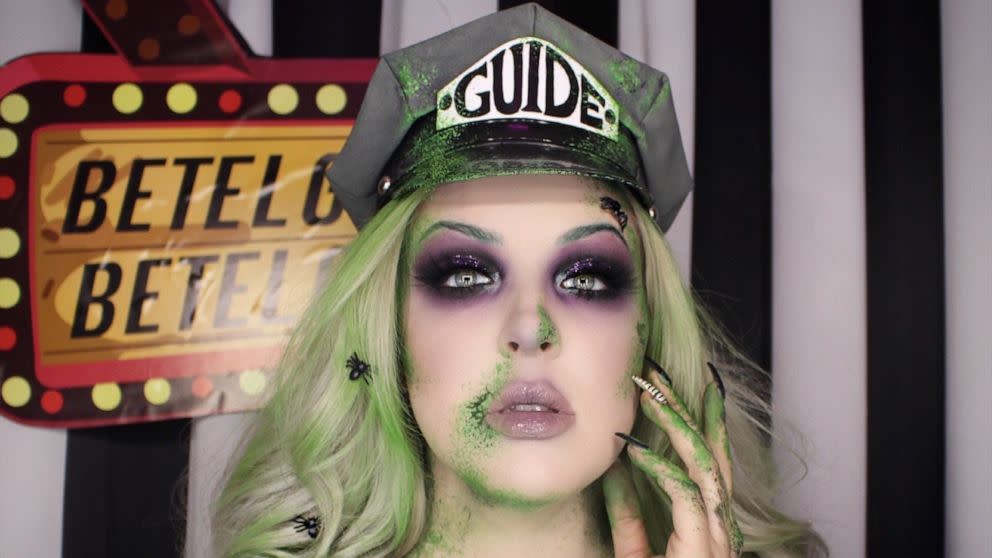