“We drink pints and we swear and we get our tits out if we want to, because we’re empowered.”

This is a soundbite included in the introduction for every episode of Channel 4’s new four-part documentary Inside Missguided, the first instalment of which airs on August 12 at 10PM. It’s delivered by the fast fashion brand’s 28-year-old senior creative Treasure, and summarises the image that Missguided wants to project of itself, as it seeks to reinforce its position as the cool, bad girl at the online shopping table following a disastrous £26 million loss two years ago.

Narrated from a perspective attributed to the women who work for the brand, Inside Missguided is an opportunity for Missguided to re-establish itself and what it says are its values, while also providing viewers an insight into the relatively new world of online-led fast fashion (this is a popular topic at present; BBC Three’s Breaking Fashion, a documentary which focussed on the celebrity-focussed label In The Style, also aired last year).

The show (produced by Pulse Films) is slickly filmed and has a reality TV feel, with talking heads edited in alongside day-to-day footage, which is heavy on the poppy aesthetics of the brand and its Manchester head office (“Just F*cking Own It” – asterisk theirs – reads one oft-revisited wall hanging).

Throughout, Missguided is extremely candid about some of its past failures – the £26 million figure is repeated multiple times per episode – and about the financial details of some of its deals. Despite this, however, it’s difficult not to feel as though this candour in some areas covers for a lack of transparency in others. The resulting product is a documentary that tells us a lot about the day-to-day workings of fast fashion and how both Missguided and the industry at large work – but not always directly, and not always enough.

In the third episode of Inside Missguided, we see corporate social responsibility manager Ashish visiting a factory in Leicester, assessing the site to see if it meets the necessary standards to become a Missguided supplier. The narration acknowledges that since 2017, when Missguided was caught using unethical manufacturing processes by Channel 4’s Dispatches, measures have been taken to improve the company’s practices. Ashish tells the factory owner, “We’re a bit stricter on the audit than other brands,” and proceeds to tour the premises, asking questions about smoke alarms and checking machinery.

Because the documentary doesn’t show this audit in any great detail, though, it’s difficult to know how thorough it truly is, or how it actually compares to the rest of the market (for what it’s worth, the brand has a “Not Good Enough” rating from the fashion ethics aggregator Good On You.) This is an example of the ways in which Inside Missguided reveals some aspects of the company’s processes, seemingly as a bargaining chip for being able to avoid telling the whole story. In the first episode, for example, designer Victoria awaits the delivery of samples to be used in a photoshoot and offhandedly mentions that her items are being shipped from China. While much is made of the visit to the UK factory, we don’t hear about the conditions that clothes which come from overseas are manufactured in, or what proportion of Missguided’s merchandise is made in the UK.

Of course, the decisions regarding which parts of Missguided’s operation to show onscreen are probably partly down to the show’s reality TV-type beats, as well as a selective approach when it comes to being “real.” One of _Inside Missguided_’s most prominent figures is Treasure, whose job takes her on photoshoots to far flung places. Treasure’s infectious personality, plus the fascination inherent in seeing behind fashion’s lens, make these parts very enjoyable, particularly for those of us who grew up watching America’s Next Top Model, and we follow her to various locations, including Austria, over the course of the four instalments.

The show’s audience will at least partly crossover with Missguided’s own consumer base – one that values reality TV highly. In two episodes out of four, making an advert to run in the Love Island ad breaks is referenced as a priority. Obviously, it’s much more splashy to see photoshoots and be toured around the brand’s off-the-wall HQ than it is to hear about international ethics codes, but sometimes the documentary’s limited amount of inquiry feels like a bit of a wasted opportunity to dive deeper into fast fashion’s famously murky waters right at the source, particularly because the industry is notoriously difficult to access for journalists.

This said, in the third episode, Missguided’s founder and CEO Nitin Passi is interviewed by the Financial Times, and this is used as an opportunity for the documentary to touch upon fast fashion’s environmental issues. Asked how Missguided is responding to scrutiny regarding its manufacturing processes and effects on the planet, Passi notes that the brand is responding to customer demand, and states that “if you buy it smartly and manufacture it smartly,” it is possible to make a garment cheaply.

The segment is disappointingly short (it moves on swiftly to show peppy footage of a sample sale billed as a “recycling event,” wherein leftover clothing is sold at discount prices to Missguided employees, which feels placed as if to tie up a complex problem in a neat bow), and Passi seems defensive, though he does make one comment that rings true: “Every retailer within fast fashion gets painted with one brush, which is not necessarily fair.”

Last month, fashion journalist Lauren Bravo wrote an article for Metro following the news that the fast fashion giant Boohoo had used factories which had severely underpaid their workers, put them in danger by staying open during the lockdown and fuelled an outbreak of coronavirus in Leicester by doing so. All of which was rightfully and roundly condemned in the media and in this article specifically. However, Bravo also notes that it’s not just online fast fashion brands which need to re-examine their practices, and suggests that the people that brands like Missguided and Boohoo cater to make them more of a target than traditional high street brands.

“There’s more than a little snobbery tied up in Boohoo-gate,” Bravo writes. “It’s easy for people to dismiss a brand that caters predominantly to young, working class Love Island fans as evil and unethical, while ignoring the unanswered questions in their own wardrobes.”

It’s true that the fashion industry at large and fast fashion in particular are deeply classed, and some of the best aspects of Inside Missguided are the ones which interrogate this. In the first episode, creative Eleanor discusses the fast fashion boom which is currently centred in Manchester – brands like Boohoo, Pretty Little Thing, Miss Pap and indeed Missguided all have their headquarters in the northern city – and the wider opportunities it has created in the fashion industry. “You don’t have to be from London,” she says. “You don’t have to be this person that’s had this sort of, silver spoon, ‘I know this person, I know that person’.”

Many of the women featured in the documentary come from working class backgrounds – we even follow Treasure to her home, where she describes her experiences growing up in a deprived area – and some are very senior at young ages, challenging the typical face of fashion. The documentary’s narration is very keen to pick up on this: in episode one, for example, we meet Zee, head of design. “She’s absolutely incredible,” says the voiceover, which speaks in the same cadence as the brand itself on social media and on its website. “She’s only 30 and the head of design, which is pretty amazing.”

While it is good to see young women from ordinary backgrounds in important roles in a traditionally posh industry, the show’s commentary around these women, and around Missguided in general, often tips into “brand feminism,” where vague concepts of “empowerment”, inclusivity and girlbossery are thrown around to the end of shifting product. As with all instances of this type of sales pitch, however, these concepts end up feeling quite contradicted by the realities of life at the brand (not least because though I am not personally convinced by the neoliberal cry for “more woman CEOs!!!!!”, it is jarring to consider that all of the executives we see onscreen are men, when the documentary insists so strongly on centring the company’s woman employees).

The brand’s plush office, with its in-house barber and spray tans, for example, contrasts starkly with the sparseness of the factory the documentary visits. It’s also hard to ignore that while the factory appears to be staffed mostly by ethnic minority workers, wide shots of the Missguided head office show the staff to be overwhelmingly white. And while in the final episode we see Missguided establishing a plus size range, in the first we hear a male photographer casually making a fatphobic comment (though in fairness, none of the creatives tasked with widening the brand’s body diversity are involved in this scene).

Missguided is certainly not the only brand with some confusing values – this is true of many mainstream fashion brands currently marketing to women – and it’s important to note that Inside Missguided does a good job presenting a nuanced picture of life there while saying a fair amount with what it leaves implicit. The documentary is also an incredibly pacey and entertaining watch, largely due to the charisma of many of the employees who are featured (Treasure especially has a thousand watt personality that lights the whole show up). But for those of us who are interested in the ins and outs of fast fashion, _Inside Missguided_’s lack of interrogation can be a little disappointing: ultimately, a conversational tone and some straight-talking about finances end up cloaking the issues that we really want to know about.

“Inside Missguided” airs on Channel 4 at 10PM on Wednesday the 12th of August. After the first episode airs, all episodes will be available to watch via Channel 4’s All4 on demand service.

Plus-size is one of the only clothing sectors to have grown this year, so why isn't there more choice?

Fri Oct 2 , 2020
It should come as no surprise that many of the brands launching plus-size collections are celebrity fronted and therefore less reliant on brand image. Rihanna’s Savage x Fenty lingerie line has been hugely popular with customers who wear bras up to size 44E and pants up to a size 28, […] 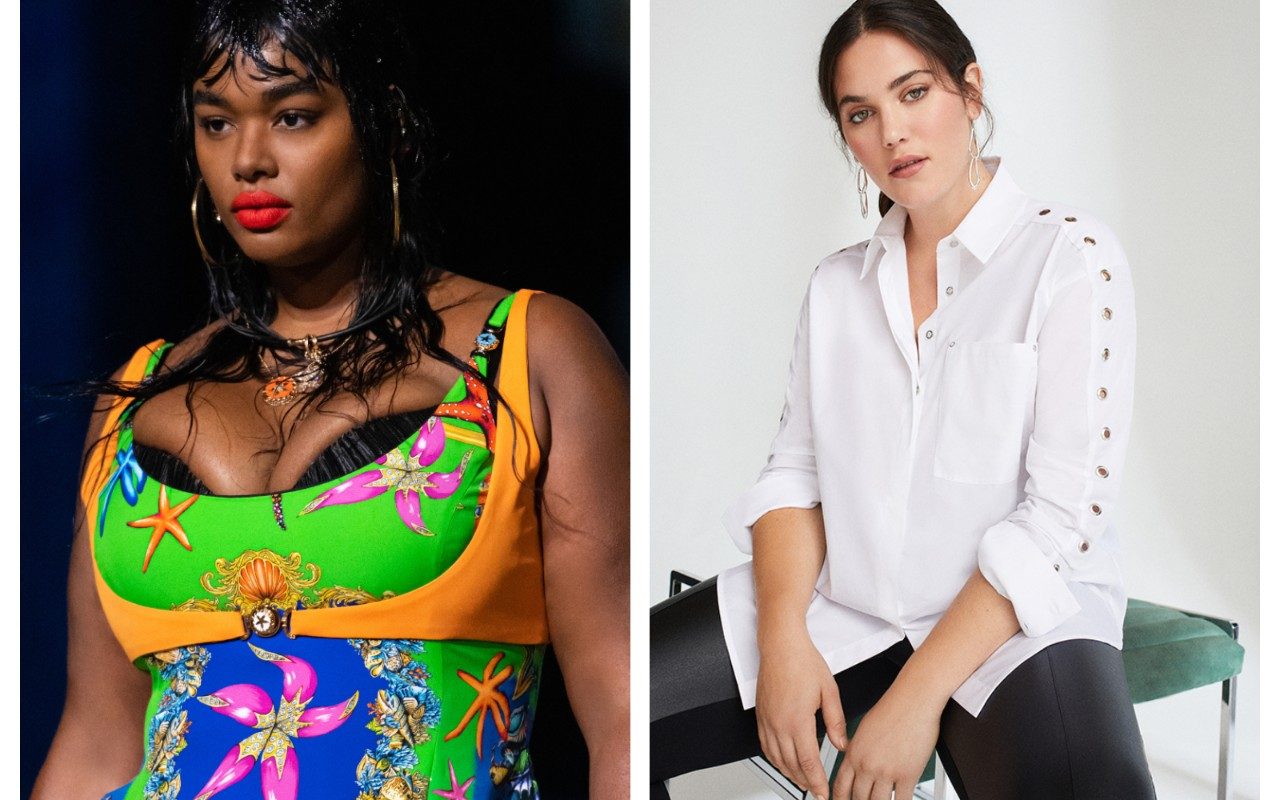